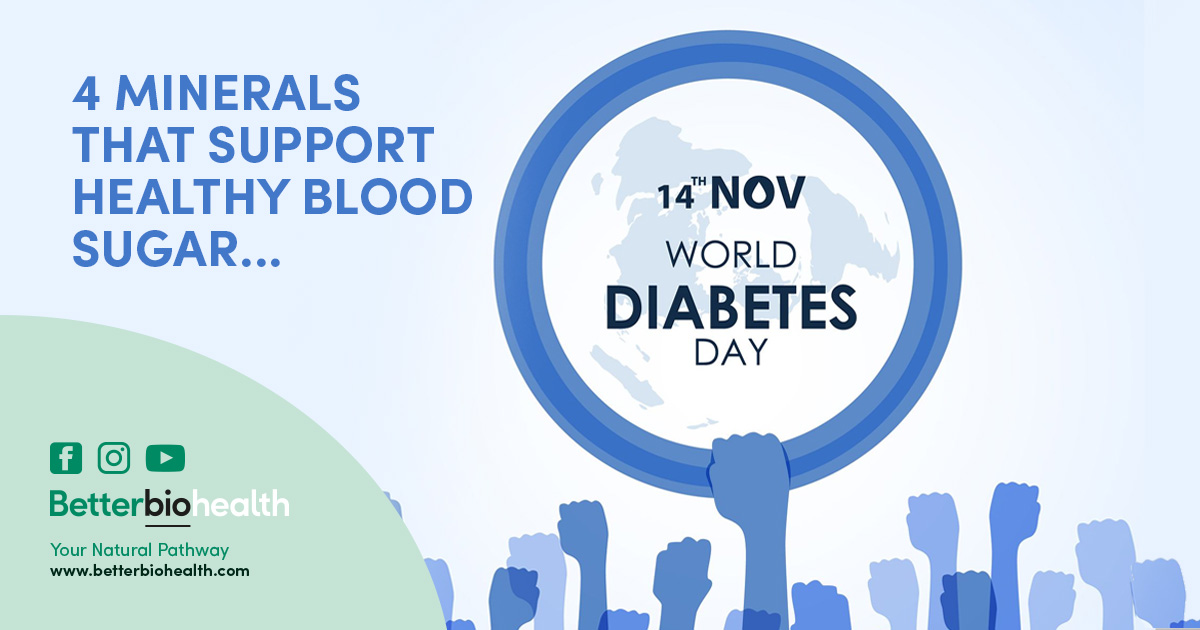 There’s a long debate about macronutrients (protein, carbs, and fat) and blood sugar, but there’s a lot less information out there about micronutrients (vitamins and minerals).

Here’s a look at four minerals that are important for blood sugar control.

A quick review (if you already know what glucose and insulin are, just skip the list):

There are reams and reams of studies on diabetes because it’s officially a “disease” so it gets a lot of attention. “Problems managing blood sugar” isn’t officially a “disease” until it gets to a particular cut-off, so it doesn’t get as much attention. But type 2 diabetes doesn’t come from nowhere. It starts with problems managing blood sugar that steadily get worse over time. Diabetes is the extreme end of the spectrum, not some new and totally unrelated issue.

All of this is to say: there are a lot of studies in this post on diabetes and people with diabetes. But they’re still relevant to people who don’t technically have “diabetes” but still have blood sugar issues (or want to avoid them).

And now, for the minerals!

Chromium is good for blood sugar control because it helps regulate insulin.

Patients with diabetes have lower blood levels of chromium than healthy controls. There’s also some evidence that chromium is helpful for treating diabetes. This study found that supplementation with a chromium-enriched yeast improved some measures of blood sugar control in people with Type 2 Diabetes. Interestingly, in some cases it didn’t so much cause improvements as stop things from getting worse. For example, the control group (no chromium) had steadily decreasing markers of antioxidant activity, while the chromium group didn’t see much of a change. But hey, “preventing more problems” is also a benefit.

For the non-diabetics in the audience, this study in people without diabetes found that chromium-deficient diets made blood sugar control worse, which the researchers could reverse by adding chromium supplements.

Zinc is another important mineral for blood sugar control. It’s an antioxidant and it’s also important for insulin management. Patients with diabetes have lower levels of zinc in their blood, and zinc supplementation helps to improve their HbA1c (a measure of long-term blood sugar control). This study and this one also found that zinc levels were significantly lower in patients with Type 2 Diabetes.

This study also found that zinc improved blood sugar control in obese children without diabetes. So again, it looks like there may be benefits for people who don’t technically have diabetes as well as people who do.

Selenium is pretty excellent for gut and thyroid health, but it’s also great for blood sugar control. This might be thanks to its general antioxidant properties, but this study also found that selenium altered the expression of a bunch of different genes involved in blood sugar regulation.

Just like the other minerals on this list, selenium is lower in people with consistently high blood sugar, even if they don’t have diabetes.

As for intervention studies: in patients with diabetes, this study found that selenium supplements helped improve blood sugar control and insulin levels. There’s also some evidence that selenium is useful as an addition to insulin therapy for diabetes. In this study, rats got either standard insulin therapy or insulin + selenium. The selenium treatment was much better at lowering blood sugar and restoring normal glucose metabolism than the insulin alone.

On the other hand, some studies also suggest that high-dose selenium supplements can be dangerous for people who already get enough selenium. If you insist on going the supplement route instead of eating whole foods, maybe get a blood test from your doctor first to see where you are.

Magnesium is a Jack of all trades. People who tend towards constipation might know it as the miracle supplement that makes bowel movements easier (it draws water into the intestine, which can loosen up stool if it’s hard or compacted). People who tend towards anxiety might know it as a calm-down supplement. Well, time to add another trick to the magnesium roster: insulin regulation.

There’s no such thing as the miracle nutrient that cures diabetes. But there’s pretty solid evidence that chromium, zinc, selenium, and magnesium are all important for healthy blood sugar regulation. If you’re worried about your blood sugar, it might be worthwhile to make sure you’re getting enough of these nutrients by using natural plant based minerals.